In 2004 I watched in awe as then-Senator Barack Obama gave one of the most inspiring speeches on the power of unity at the Democratic National Convention.

In 2007 I had the opportunity to sit down with him and talk about health care. I was hooked and signed up to caucus. I knocked doors and volunteered as a co-precinct captain. I couldn’t have been more excited when he won my precinct!

Without question, this is the most exceptional moment of our campaign. I am humbled and so very proud to earn the endorsement of the 44th President of the United States, Barack Obama.

Join us! Sign up to volunteer and donate at www.matsonforiowa.com.

“They’re Americans who aren’t just running against something, but for something. They’re running to expand opportunity for all of us and to restore the dignity, honor, and compassion that should be the essence of public service. I’m proud to endorse even more of them today and I hope you’ll give them a chance with your vote.” — 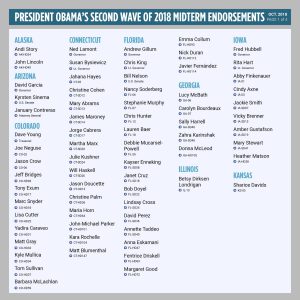